Just a quick update for now. LOTS has happened since I last posted though. LOTS more wiring has happened, mainly between the FPGA and the bus transceivers that I'm using to convert between the FPGA's 3.3v logic and the Z80's 5v logic.  I've also put prism into a case, wired in the twin SD Card slots, and wired up a power switch, power status LED and a reset button.

On the left are the two SD Card slots with their related activity LEDs. Next, there's two red "NMI" buttons. Following that are 3 switches - the first will control if FLASH or NVRAM is to be used on startup. The third is the FLASH ROM write protect and the middle switch will likely switch between ABC and ACB stereo for the AY, though I've not decided for sure yet. Finally on the right is the power switch, power LED and reset switch. 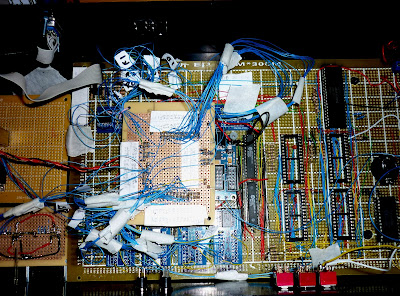 On the bottom left is the PCB with the SD Card sockets mounted. Above that is the PCB with the joystick, keyboard and mouse sockets on it (not currently wired in). Above that's the VGA socket. The rest of the PCB is as described previously (though with a lot more wiring completed and the battery socket added)
The four empty sockets on the right are for the main memory, Flash ROM and NVRAM. These have been temporarily removed during testing to avoid damaging them if anything goes awry... I've got quite a lot of the 32K SRAM chips I'm using as video RAM, which is probably just as well as the interface and interplay between the FPGA, Z80 and video RAM is the first thing I'm testing. I've sourced and ordered a small number of 20MHz Z80s too but will be testing with a spare 4MHz version.
Yes the wiring looks a little messy, but it was hard to come up with a tidy way of doing it! Each parcel of 8 wires from the bus transceivers are taped together to make it a little more managable.
As of last weekend, ZX Prism is outputting a test pattern to its monitor. The pattern is generated using simple logic and counters in the FPGA, but it proves that the video circuitry is working, the syncs are being correctly generated and the 12 bit colour is working courtesy of the resistor-DAC. 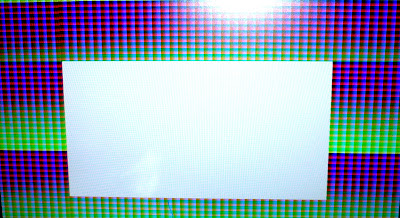