The third mode is the one which I've been working on recently and had success with last night. It's one of several proposed 256 colour modes. This one uses the attribute byte to determine the logical ink colour (0-255). The paper colour is determined by the ULA2 border colour stored in a latch at 0x4E3B. 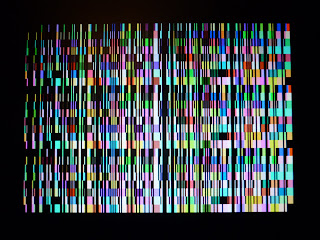 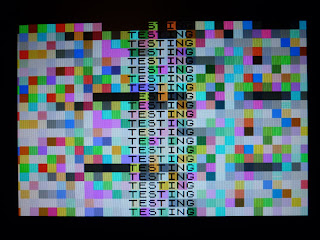 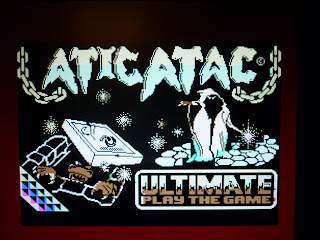 Atic Atac loading in 256 colour mode with a randomised palette.
Note the effects of the timing issue on the Ultimate logo
The rainbow stripes don't work when there's only one paper colour! 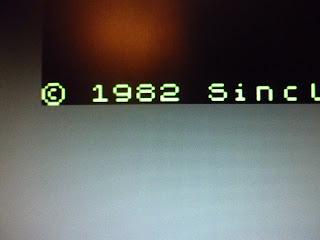 (C) 1982 Sinclair Research in lime green.
It had to be done.
There are a number of bugs/"features" with this mode:


Having a single paper colour for the whole screen isn't particularly useful for detailed graphics. Other similar paletted modes are to be implemented which will be more useful:
Posted by SJB at 7:53 PM 1 comment:

One other major thing that has changed recently in ZX Prism is the master clock frequency.

Recently, to prepare for the more complex video modes and to allow faster CPU clock frequencies I doubled the master clock frequency to 56MHz. For now, I've adjusted the way the CPU and Video clocks are derived so they still run at 14Mhz and 3.5 or 7MHz.

The on-FPGA palette memory seems quite happy at these speeds, so all is looking good for the new screen modes.

The next thing to do is to increase the video clock to 28Mhz and adjust the read/store cycle for reading the data and attribute bytes. Some of the new screen modes need more data to be shifted around than the standard Spectrum mode. I'll be attempting to do the majority of the screen modes with the same contention patterns (at least when the CPU is running at 3.5Mhz) so that games with special screen effects (split borders etc) work. The chunky and planar screen modes will probably incur more contention - though the CPU speed can be increased to compensate of course.

Speaking of contention... I've still not had complete success with implementing it - however I am a lot closer now. The increase in master clock frequency and the redesign of the video decode/encode subsystem gives me a chance to change how the timing of everything fits together - including ensuring contention is correctly applied at faster CPU speeds to avoid the crashes that currently happen when the CPU is running at 14 or 28MHz. Time to get the pencils and paper out and start counting clock ticks...

Recently, I've been doing a number of tests of different attribute byte decoding schemes, but of course the ultimate goal has always been to be able to switch screen mode from basic or machine code. Today I made inroads into making the screen mode switchable. An 8 bit latch at 0x1E3B serves as the screen mode selector. 5 bits controls how the video data is decoded to determine pixel colour. The remaining 3 bits control the screen resolution: M4 M3 M2 M1 M0 R2 R1 R0

This is a paletted mode, and by default all colours are set to black. The palette is controlled as follows:

The colour to be redefined is stored in a counter at 0xBE3B. Then the red,green and blue levels for that colour are output to 0xFE3B. Each successive write to 0xFE3B goes to the next colour element - red, then green, then blue. After the blue level is written, the colour number increments and therefore a subsequent write to 0xFE3B will define the red level for the next colour and so on.

Initial tests of the paletted mode are encouraging. The colours are able to be redefined, however there are some interesting effects due to timings which will need to be ironed out.

This past weekend has seen a number of steps forward. The unpaletted 32 colour mode proof-of-concept code was expanded to allow the border to be one of 256 colours (bits 7..0 equating to 2 bits blue, 3 bits green, 3 bits red - BbGggRrr). This tested the ULAplus-style 8 bit palette.

The border is currently controlled by an OUT to an 8 bit latch and currently replaces the usual 3 bit border. Another latch has been implemented which selects the CPU speed and in the future will also reflect "machine type" (or at least which memory paging system to use). Setting and unsetting bits 0 and 1of this latch selects between the 4 CPU speeds implemented.
As at this point only 3.5MHz and 7Mhz modes work correctly. 14MHz doesn't work yet as the video ram is on the same data and address bus as "normal" (uncontended) RAM and memory contention isn't yet implemented. Likewise, 21MHz causes bus collisions (and some rather pretty crashes)

Speaking of implementing memory contention. At 3.5Mhz I want this to be as accurate to ZX Spectrum timings as possible.  My attempts thus far to implement ANY sort of delay when the CPU address space is within video RAM have been unsuccessful:


Additionally, I've confirmed that code using the R register fails consistently. Speedlock 1 works right up until the loading completes and then crashes. Most machine test suites (ulatest3, fusetest etc) fail spectacularly - the two aforementioned test suites crash in fact.
I shall revisit memory contention later. For now, I can live with the fact that some software which relies on cycle-accurate memory contention (eg for border effects) will look odd. The crashes and apparently incorrect CPU behaviour is more of an issue, but again I can do little about it at the moment. The T80 code isn't well documented at all and I'm still learning the ropes with VHDL really. A little bird tells me that someone working on another "advanced Spectrum" style project has done some bugfixes to command timing and flag behaviour, so I'm hoping they'll share them with other T80 users in the future.
Finally, I talked to Andrew Owen regarding reserving a block of IO addresses in the ZXI standard. This means that the ZX Prism's IO addressing won't clash with any other ZXI certified device, for example Spectranet and ULAplus (though of course ZX Prism will be providing ULAplus functionality at its usual ports anyway). This is especially important if I intend to add an edge connector to ZX Prism so that it can use existing ZX Spectrum peripherals like divIDE etc, or should I build a plug-in for a standard ZX Spectrum which provides some or all of the ZX Prism's extended functionality.
The range I have been allocated is xE3Bh which gives me 16 IO addresses which should be plenty. Currently I've earmarked:
Currently I'm planning using 16K memory pages (per Spectrum 128/Scorpion/Pentagon). This may change to 8K pages (Timex/Spectrum SE/ZX81) or be switchable, however I don't want the memory bank switching to become too complicated.
Posted by SJB at 7:25 PM No comments:

Today I started rewriting Mike's video code. As a test, I disabled FLASH and used bit 7 of the attribute byte to make a 2-bit BRIGHT: 4 different brightness levels of 7 different colours plus 4 identical shades of black... So technically 29 colours. 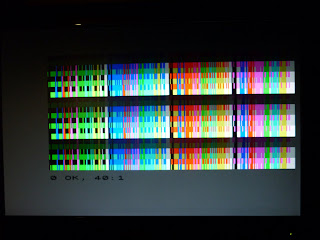 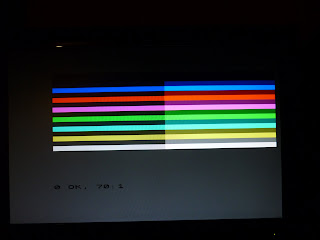 Obviously I made the non-bright, non-flash colour level a little too dark, but as a test it sufficed admirably.
Yesterday out of interest I ran a number of test suites with interesting results. ULAtest3 completely crashed - reset the machine. Fusetest did a few tests and then crashed. Z80test failed on all MEMPTR tests and most of the register tests involving the R flag. Taking another look at Mike's VHDL I noticed he's using the T80se core - and it states that it doesn't match true Z80 timings. It's also an older version. I'll download the latest version of the normal T80 core and see if I can replace it.
Finally, here's a picture of Aquaplane showing the broken border effect due to issues with the T80se core having different timings and the lack of bus contention. 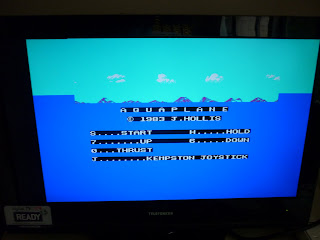 Today I looked at some other open-source FPGA based Spectrum compatibles but had very limited success. Nonetheless, there were some interesting ideas in the implementations which might be drawn on later.

In short, I'll be pulling some ideas (and perhaps using a bit of code) from ZXGate and from the 128 Spectrum implementation which is part of Alex Freed's FPGApple - but the basic foundation of ZX Prism will be the T80 open core Z80, and some of Mike Stirling's FPGA Spectrum code.

Further testing of Mike's Spectrum, with the likes of Aqua Plane and reading some of the comments in his VHDL code confirmed my suspicions - as the implementation handles bus arbitration differently, there are speed differences between it and a real Spectrum when the CPU wants to use the video RAM at the same time as the video circuit.

So my first task will be to make some alterations to make a nice sturdy "foundation" for all the bolt-ons mentioned yesterday to bolt onto:

Today I trialled Mike Stirling's open source FPGA Spectrum on the DE1. I successfully loaded Atic Atac from tape with no problems but Beach Head failed - possibly because of a loading error or possibly due to Speedlock 1 being quite... finicky.

The spectrum screen is slightly misplaced on the display - there's a blank area before the border starts on the left. A few tweaks to the clock code didn't help this but I didn't spend much time on it - at the moment I'm looking at a number of open source FPGA Spectrum solutions to select which one I wish to use as a basis for the Prism - or I might use bits and bobs from different solutions. Basically I just need a basic framework on which to add my mods/extensions.

Currently, using Mike's code, the Prism is as follows:

When deciding which code framework to start from I'll also be looking at ZXGate (which does Spectrum, ZX81 and Jupiter Ace) and another which is an offshoot from an FPGA Apple machine and emulates a Spectrum 128. All look to have their benifits (ZXGate has the '81 support, the other has 128 memory paging etc and Mike's was written on the DE1 hardware which I'm using for Prism)